At first glance the Taskbar in Windows 7 is similar to Vista’s Taskbar. Make no mistake about it, the changes are bold and may be confusing to you – at least until you get more comfortable with them.

Perhaps Microsoft hasn't fully understood how the changes would impact users. If they had they might have done a better job telling you about them. While beta testing Windows 7 I failed to fully understand the changes myself. It wasn’t until later when I realized how different the Windows 7 Taskbar really was and how it worked.

In this article I will detail the changes and let you decide for yourself whether or not you like them.

Nomenclature
The Changes
How To
The Problems
Editorial Privilege

Some of the Windows 7 Taskbar terminology may be new or confusing to you. Let me define some of those terms for you right now before we get started.

Here is a quick summary of the changes to the Windows 7 Taskbar:

Copy a file in Explorer and you will see the copy progress in a second window as usual. What has changed is that the progress is also displayed in the Explorer Taskbar Button.

So, how do you use the Windows 7 Taskbar?

There are two ways to open the Jump List for any Taskbar Button:

The Jump List includes the Most Recently Used items in the top section. See the image below for a picture of the Jump List for Mozilla Firefox.

Launching a program is easy. Unlike a desktop shortcut where you have to Double-Click to launch a program, programs pinned to the Taskbar work like Vista's Quick Launch icons. Click once on any Taskbar Button to launch the program. 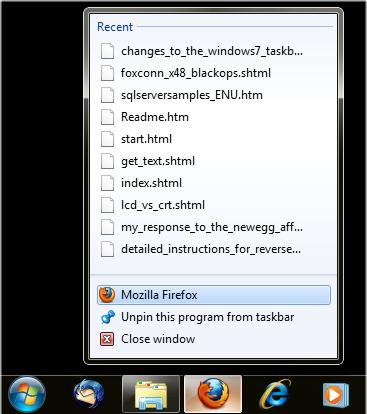 Open the Jump List to launch more than one instance of a program.

If a window is already open for the program, the Taskbar Button will be highlighted. You must open the Jump List and select the program, Mozilla Firefox in this example, in order to launch a second instance of the program.

In this example I Dragged and Dropped the Mozilla Firefox shortcut icon onto the Taskbar.

There are four ways to pin a program to the Taskbar: 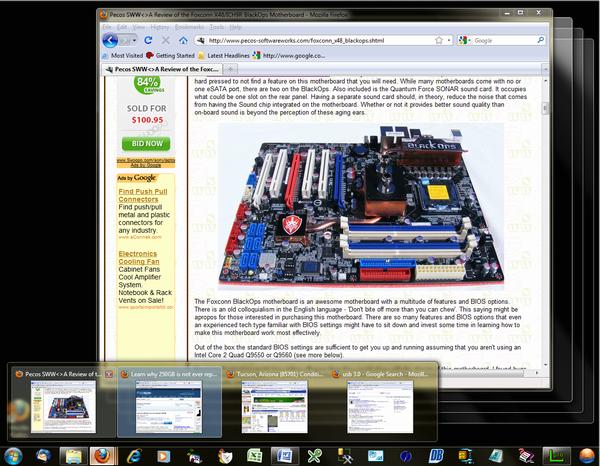 Aero Peek – This example shows four Firefox windows open and I am peeking at the full window of the first thumbnail. 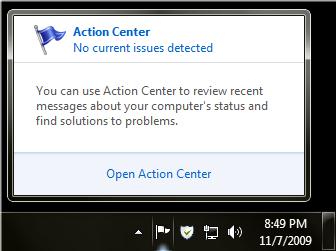 Notification Area Action Center – Click on the small flag in the right side of the Taskbar to view the Action Center. 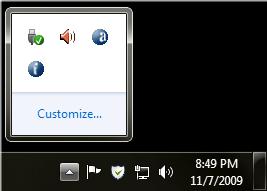 Important icons may be hidden and only accessible by clicking the small Up-Arrow. When a program adds an icon to the Notification Area it is hidden by default for a much cleaner look. You can modify the settings for hidden icons if you want them to always be visible.

Show Desktop - The Show Desktop icon has been changed to a transparent bar and placed to the right of the system clock.

Microsoft will likely disagree with me but I see some problems with the Windows 7 Taskbar.

What you think about the Windows 7 Taskbar is entirely a matter of personal preference. Some think it is terrific, others think it's terrible. I question whether or not it increases productivity. Personally, I don't see any performance gains by having the desktop shortcuts pinned to the Taskbar. Too many pinned programs look messy and they can't be organized like shortcuts can on the desktop.

I find the combination of program launching and highlighting to signify an open window confusing. The inconsistent behavior that occurs when you click on a Taskbar Button with and without a window already open is poor UI design.

Thumbnails and Aero Peek on the other hand are convenient ways to quickly identify and go to an open window.

I wanted to use Windows 7 for a while before coming to a final conclusion about the Taskbar. I have been using Windows 7 for quite a few months now and have decided that I prefer the Vista Taskbar. Of course there is always the possibility that I have finally become that stereotypical stodgy old fart that finds any change unacceptable.