I recently had a birthday. I received a phone call from my parents who live in Cincinnati. They couldn't call using their wireless-based phones. Their power was out from a freak storm that was part of the leftovers of Hurricane Ike. We talked for less than ten minutes using their cell phone. Their power was off for about a week and during that period I had absolutely no way to reach them, though they were eventually able to get an old Princess touch tone working.

Later that same day I received a cell phone call from my brother. He, his wife and his five kids sang Happy Birthday to me. Less than 10 minutes into the call the line went dead. They called me back and we finished the call.

These are just a few examples of modern technology that I am less than thrilled with. The DSL my mom and dad use requires power in order to make a phone call. The cell phone my brother used had that all-too-familiar digitized tinny sound quality and it is subject to dropped calls and battery life issues.

And now I am looking to buy a new computer monitor and I see a similar frustrating pattern. My $99 17 inch Proview CRT monitor has been a good monitor considering the price, but it is showing signs of dying. That is why I found myself looking through the monitor section at Newegg's Web site. And I wasn't looking for LCD monitors.

I visited my parents last summer and I got to see first-hand the Samsung 19 inch LCD monitor my dad had purchased. This was no cheap LCD. He paid nearly $200 for the SyncMaster 930B LCD demo unit and Samsung has one of the highest rated LCDs on the market.

I wasn't impressed. I did find that he was not running the monitor in its native 1,280x1,024 resolution, which wasn't too surprising. A lot of moms and dads don't realize that unlike CRT monitors, operating a LCD monitor in anything but its native resolution results in poorer picture quality. I made the resolution change and the monitor did look better, but I could still see each LCD pixel. And that really bugged me. 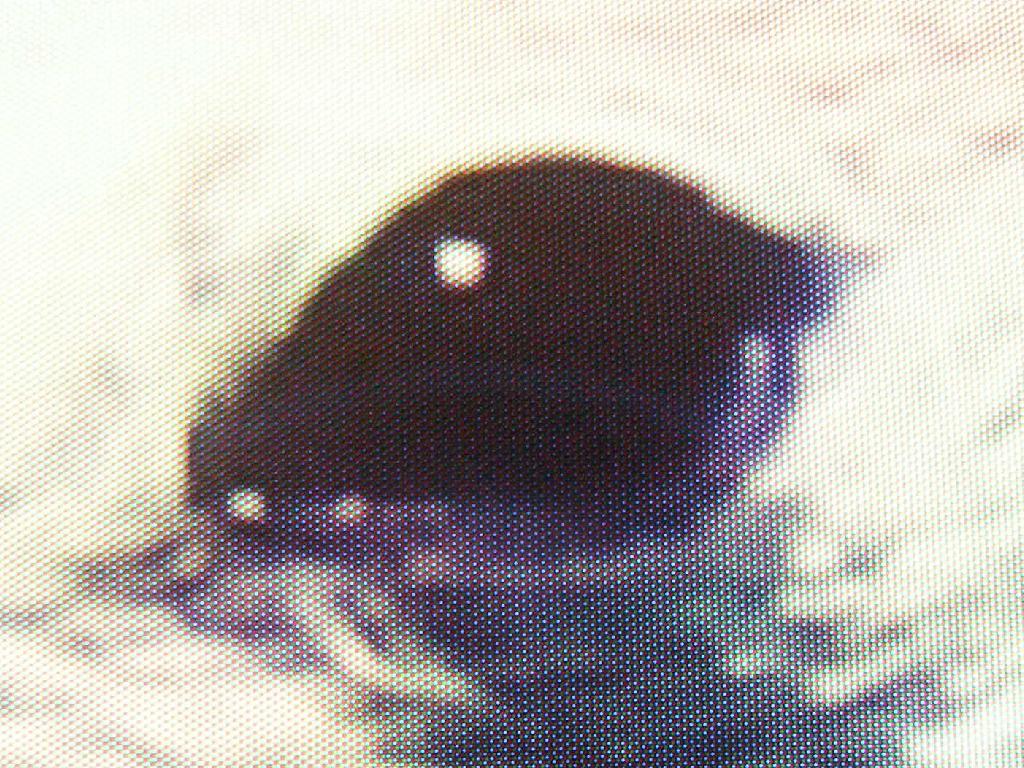 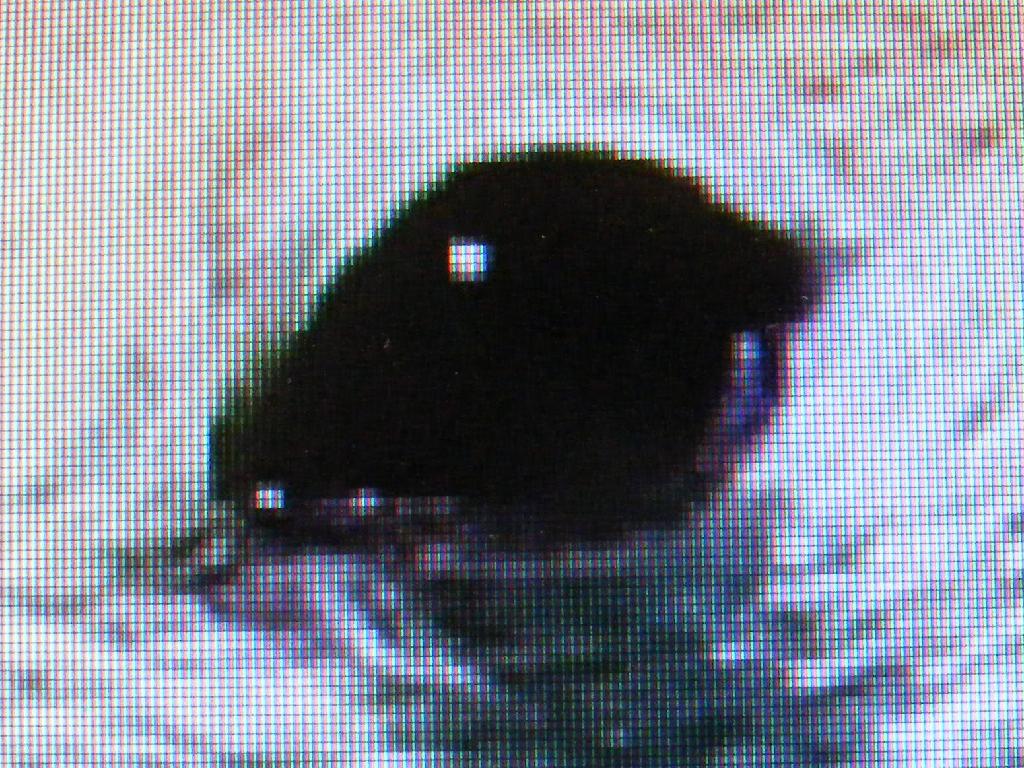 Images were taken at 1024x768 resolution on both monitors using a Fuji S700 digital camera.

I can understand why someone would give up the quality of a landline phone for the convenience of a cell phone but I have more trouble trying to understand why everyone has given up CRT monitors for LCD monitors. OK, they are cool both figuratively and literally. They don't give a lot of heat like a CRT monitor. They save a lot of desk space and have that neat thin look to them. They just plain look cool.

But when it comes to picture quality the CRT still wins hands down - although the gap is quickly closing. And isn't that still the primary reason why you buy a monitor? Most of the problems of early LCD models have been mitigated or solved - ghosting, limited viewing angle, poor color and brightness. Set any LCD next to a good CRT and the CRT still wins, at least to my admittedly waning eyesight.

And LCDs have other problems as well. As I mentioned earlier, LCDs must be run in what is called their native resolution to get the best image quality. If you purchase a LCD and find out that the native resolution is 1024x768 and you like having your desktop at 1280x1024, you have a problem.

And then there is the problem of dead pixels and stuck pixels. Seeing the pixels on a LCD screen really bugs me. Seeing one red pixel 'stuck on' somewhere near the middle of the screen would drive me bonkers. And these types of problems are quite common. There is an acceptable limit for the number of dead or stuck pixels with the purchase of a new LCD at most vendors. Newegg's return policy for LCDs states that you must have at least eight dead pixels before the monitor is considered defective.

The latest trend in LCDs is toward widescreen LCDs. Widescreen LCDs are great for watching DVD movies, but pretty lousy when it comes to viewing documents. Most documents still follow the standard 8.5 by 11 inch format and a widescreen LCD monitor is just not very good at viewing that size document, although they are good at displaying two 8.5x11 inch documents side by side. Anyone remember those monitors that were a lot taller than they were wide? They were designed specifically for viewing 8.5 by 11 inch documents.

We can't discuss monitors without considering the video card driving them. Your video card should be matched with the monitor. The video card should have screen resolutions and formats supported by the monitor. This is especially important when considering widescreen monitors. Video cards that do not support widescreen formats will either stretch the image to fit the screen or leave unused color bars on each side of the image.

This is less of a concern with newer video cards but be aware that it may be an issue for your existing video card.

In order to get the LCD image for this article I had to pay a visit my local library. The Gateway LCD monitors they were using looked better than the Samsung as I remember it. I have to say the Gateway LCD was almost good enough to make me reconsider the purchase of a LCD monitor. 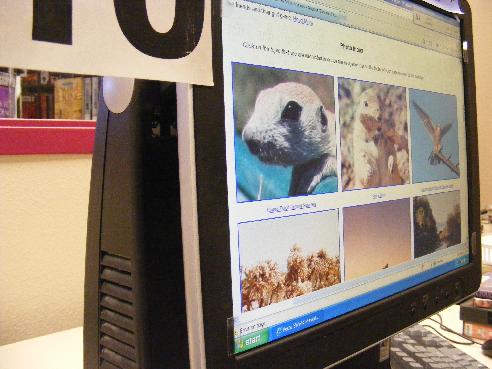 While you will see little or nothing when viewing older LCD monitors from the side, newer monitors like this Gateway can be viewed from the side with very little image loss

One of the more colorful librarians was kind enough to remove the privacy screen for me. I hadn't realized it was there and would have affected my pictures. 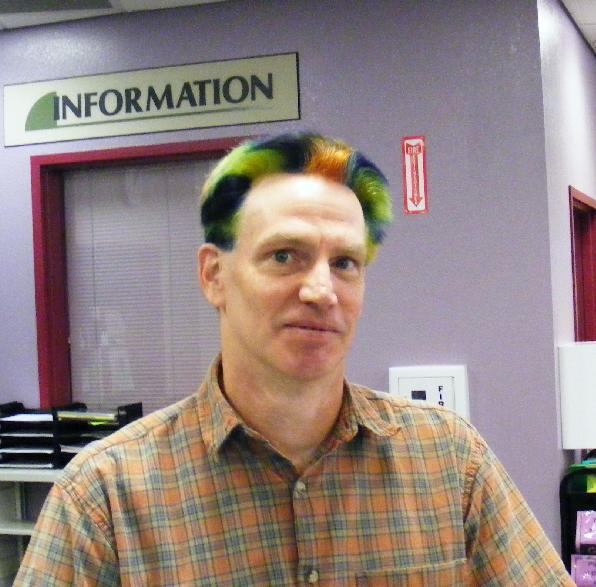 I knew you wouldn't believe me if I told you about his hair so I asked him if I could take his picture and he kindly consented.

The human machine interface is a personal experience. Your preferences may be different from your cube-mates or mine. I'm not saying you should purchase a CRT monitor during your next PC buy. I am suggesting that you don't overlook them.

CRT monitors are becoming harder to find but NEC still makes a reasonably priced 20 inch model. Find a local store where you can compare LCD and CRT monitors side by side and decide for yourself.

Lara Luepke has written an excellent Monitor Buying Guide. In it she calls those of us still using CRTs Luddites. Call me a Luddite but I think I'll take the CRT.

Update September 20, 2009: My Proview CRT monitor finally needed to be replaced. It didn't die, it just became too dark to use. I took a trip to Best Buy and viewed the LCD monitors they had in stock to see if their picture quality had improved. I liked the HP and LG monitors. The picture quality for the 1080P models compared reasonably to the picture quality I was used to with my CRT monitor. I ended up with the HP w2338h 1080P 23 inch LCD widescreen monitor. One of my major concerns about LCD monitors was eased when I discovered that there were no dead or stuck pixels.

The HP monitors had, in my opinion, the best picture quality. When compared side by side with ASUS, Acer and Samsung they produced a much shaper picture and more vibrant colors. The HP LCD monitor I selected is far from perfect however. The HP w2338h model has a shiny screen that can reflect light sources behind you and can be very annoying. I like to watch DVD movies I borrow from the local library and I thought this 23 inch HP monitor would be perfect for watching widescreen movies. Unfortunately, the brightness degrades drastically when I sit down on my couch and view the monitor from an angle slightly below and to the left of the monitor. It was so bad I almost sent the monitor back.

On the plus side, the brightness and picture quality compares very well with the CRT when I am sitting at my desk viewing the monitor from an angle slightly above the monitor. I do not see individual pixels like I did with the older SyncMaster 930B Samsung LCD monitor. The pixel pitch is 0.265 mm which is about the same as the .25 mm dot pitch on the CRT monitor I was replacing. The native 1920 x 1080 resolution is the perfect resolution for my tastes but your tastes might differ. The monitor wasn't cheap but it was $80 cheaper than the NEC 20 inch CRT monitor.

The extra desk space in Windows allows me to put two Word documents side by side with both documents visible. I can be more productive with this monitor. If you're in the market for a new LCD monitor, check the Dell coupons page as they even offer other brands.

The 1080P LCD monitors now compare very well with CRTs and that's good because you just can't find CRT monitors anymore. You should always view a LCD monitor before purchase side by side with other brands. Also, view the LCD monitors above, below and from both sides if you want to use the monitor for more than just desktop use.

Wikipedia has a good list of the pluses and minuses for CRT and LCD monitors.