A lot of information that I have run across on the Internet about RAID 5 has somewhere in the summary - "One of the most popular RAID levels". What they don't mention is that RAID 5 can be a real disaster on a desktop PC.

I wanted to try RAID 5. I had read a lot of those sites that told about the popularity of RAID 5. If it's popular it must be good - right? The testing I did for the Use Reverse Integration to slipstream Windows Vista SP1 and SP2 article was very system resource intensive. I was also developing software. I wanted to build a new high end system fit for a power user. RAID 5 was the next step up from RAID 0/RAID 1, or so I thought.

I ordered three Samsung 750 GB HD753LJ SATA II drives that seemed to fit the requirements. I soon learned that RAID 5 on a desktop PC can be a bad idea.

The installation of the three drives and RAID 5 volume creation went without a hitch. I had disconnected one of the drives to get to a jumper on the motherboard and failed to reconnect it. On startup, the RAID 5 volume was marked as Failed. It was the kind of mistake that can be easily made by most non-technical users. It was a small mistake with large consequences.

Starting a RAID array with one member missing from a RAID 5 volume using Intel Matrix RAID requires a rebuild once the system is turned off, the missing drive reconnected and the system restarted. The Intel Matrix Storage Manager reported that the rebuild process would require more than 50 hours to complete! Over the next hour this number finally stabilized at 22+ hours as the expected rebuild time. 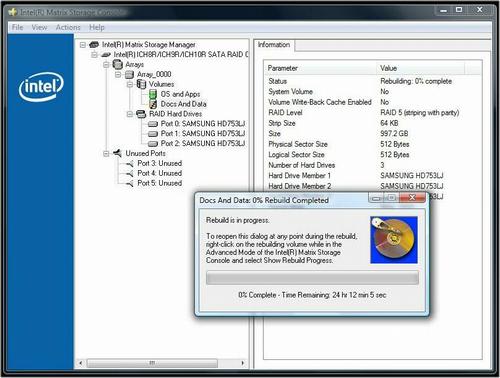 That was still too much time to have my system busy with the rebuild. During the rebuild, disk drive performance is much less than what it is when the array is in a Normal state. RAID 5 requires longer to rebuild due to the multiple read/writes and the extra processing time required to calculate and write the parity information.

To make matters worse, the rebuild process failed at 25%. It restarted and failed again. I had to delete the RAID 5 volume and recreate the volume. Fortunately I had my data backed up on another computer.

RAID 5 has another downside. If you are using a firmware/driver based RAID controller like Intel Matrix RAID there is additional CPU overhead required to calculate the parity. The overhead is relatively small and systems with two or more CPUs should have no problem keeping up with the parity calculations.

During a full system backup, Windows Vista locked up a few days later. I wanted to experiment and cause a Verify and Rebuild/Rebuild status. I had to shut down Vista by pressing the power button on the PC. After reboot and Vista startup the volume status was Initializing. I had never seen this status when running RAID 0 and RAID 1 and is apparently unique to RAID 5. A RAID 5 volume initialization writes parity data for the entire volume and need only be performed once after RAID 5 volume creation. 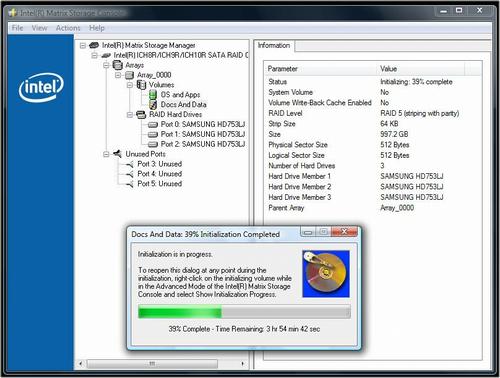 The status originally showed 6:58 to complete the Initialization. The image above shows a status of 39% complete and there was still almost four hours before the RAID 5 volume would be returned to Normal.

Any abnormal system shutdown will require a volume Initialize or Verify and Repair process. A power failure or pressing the reset button on the PC is all it takes. Overall RAID performance is greatly reduced until the recovery process completes.

There is some good news here. The Initialization and Verification and Repair tasks take much less time than a Rebuild task. Still, a 1 terabyte RAID 5 volume can take more than three hours to Verify and Repair. 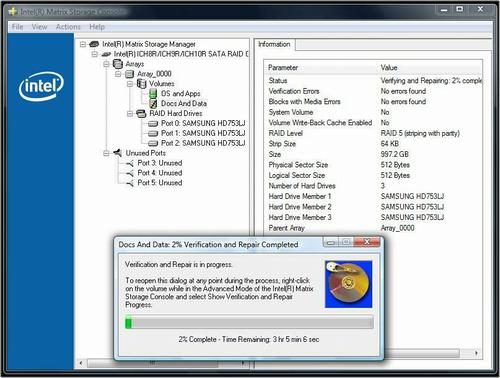 It is typical behavior for the RAID volumes to be marked as Normal during POST following a power outage. However, once Windows Vista starts and the IMSM is loaded, the IMSM will show the RAID volume as Initializing or Verifying and Repairing.

RAID 5 won't give you a boost in performance - it is in fact slower than a single drive. RAID 5 will maximize disk space and provide data redundancy but at the price of hard disk drives these days it makes a lot more sense to just buy larger drives and go with a RAID 1 setup. RAID 5 is more complex than RAID 0 or RAID 1. There is a good chance that RAID 5 will, sooner or later, give you headaches when implemented on a desktop PC and who needs any more of those?

There is one Intel Matrix RAID implementation that might make sense. You can run both a RAID 0 volume and a RAID 5 volume in an Intel Matrix RAID array. In this configuration a three drive RAID 0 volume can provide some modest performance gains over a two disk RAID 0 volume. If you are looking for pure speed and can afford the three drives necessary then you might consider a RAID 0 and RAID 5 combination. You might also consider a UPS to minimize those pesky Verifying and Repairing processes and reduce the chance for data corruption that can occur from a power failure.

A computer enthusiast building a HTPC can also benefit from the additional storage that RAID 5 offers over RAID 1.

My recommendation is leave RAID 5 for the true tech-types, power users and IT professionals who implement RAID 5 on servers in data centers.

Maximize the performance of Windows Vista and Intel Matrix RAID