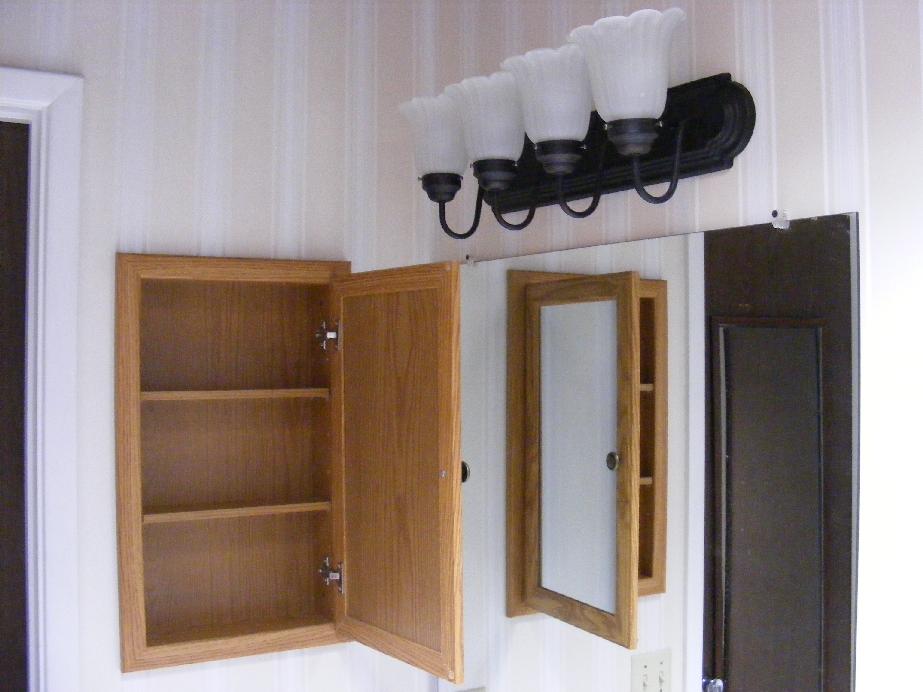 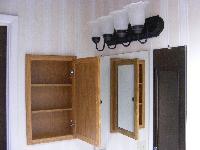 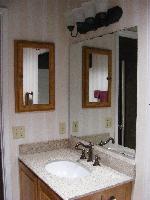 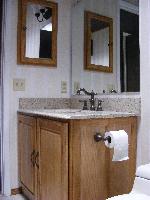 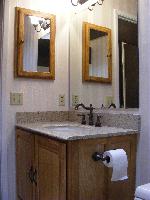 I had found four very nice fluted 'tulip' glass shades at the Habistore. I found and installed a faux oil-rubbed vanity light bar. After the installation I discovered that the glass shades pointing down was a potential problem. The medicine cabinet door, when installed, might hit the leftmost glass shade. I removed the shades, bulbs and vanity bar and reinstalled it to the electrical box with the glass shades pointing toward the ceiling. After reinstalling the bulbs and shades I found that the light directed toward the ceiling was better with the dark brown ceiling that I had.

I went back to Home Depot and asked about the dimensions shown on their display. The plumbing department expert told me that the dimensions listed on the displays were indeed the outside dimension. One of the medicine cabinets was lying on the counter and he measured the box portion of the cabinet and it was slightly smaller than 14x24x4. Exactly what I needed. I picked up a similar 16x26x4 inch oak model and took it home. I thought I finally had my medicine cabinet worries behind me.

I opened the box, took out the cabinet and placed it into the existing space in the bathroom wall, or at least tried to. It was too big. The opening dimension of this model was closer to 16x26x4!

Confused yet? It is all very confusing.

Back to Home Depot for a refund where I discovered that there are two types of mountings for medicine cabinets. There are recess mount and wall mount models and I had purchased a wall mount only model. Some models are both wall mount and recess mount.

The Home Depot didn't have a 16x26x4 recess mount oak medicine cabinet with 14x24x4 opening. I went to Lowes to see what they had. One model looked promising. The information on the box was confusing and the department expert and I concluded that the opening size was 16x26x4. I was walking away but took one more look at the cabinet. From the ground it seemed to have the same opening dimensions as a medicine cabinet next to it with 14x24x4 inch opening measurements. I asked Elvin, the plumbing department pro if either he or I could climb up to the display model and physically measure it. He said that he would have to do it and was kind enough to accommodate my request. The actual opening dimension was slightly less than 14x24x4 and would work perfectly in my bathroom.

To make matters even more confusing, the outside of the box said '16" Wide x 26" High*'. The asterisk refers you to this statement 'See label for size to nearest 1/4'. 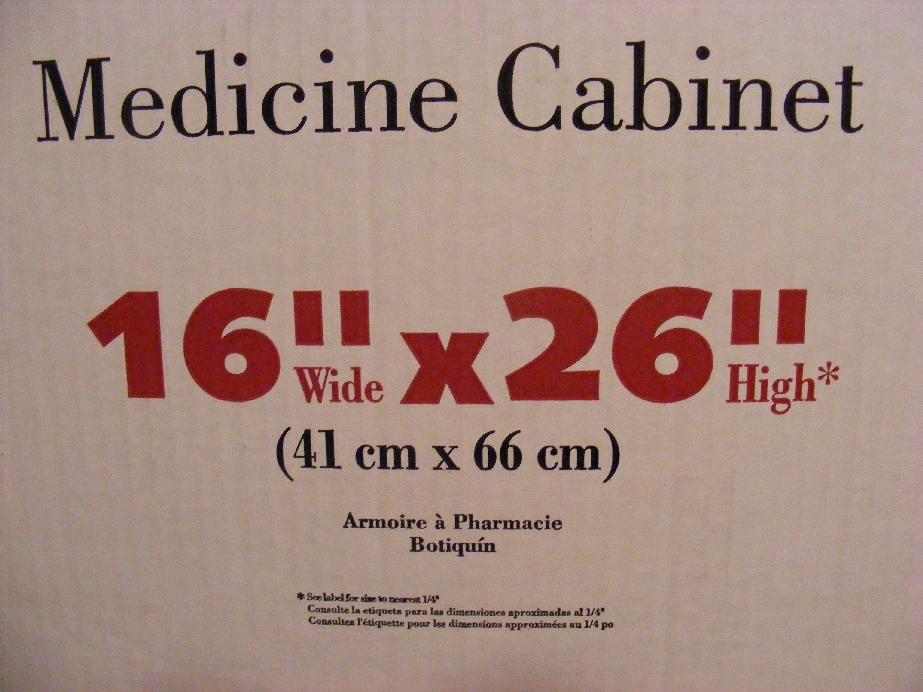 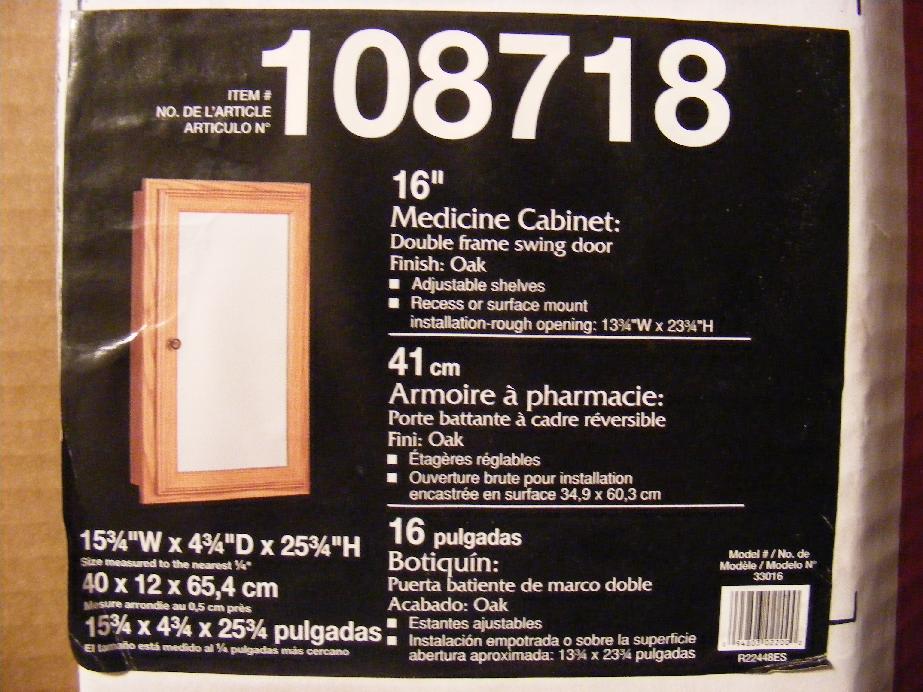 You can see yourself that the measurements on the label are not 16"x26" and you have to look closely on the right side of the label for what they call the installation-rough opening measurement. That is lacking too. The depth is not given. It might be a good idea to bring a tape measurement with you when purchasing a medicine cabinet and verify the measurements yourself. In this case the depth fits perfectly in a wall with true 2x4 inch studs.

Read the box carefully for any included accessories and for any additional hardware that you might need. This medicine cabinet came with very nice door hinges (installed) and a round rough bronze button handle. Also included are two faux oak shelves and ten plastic push-pin type shelf holders. You need eight so two are included as extra. You will need four screws of your own to attach this cabinet to the framed studs. I had four very nice flat-head black screws in my inventory that were the right length for the job. I predrilled and countersunk the holes for a nice clean look.

Nothing on the cabinet is actually oak and the color is darker than oak should be and darker than I would have preferred, but I consider myself lucky to find a medicine cabinet with dimensions that are 30 years old and no longer popular. At a certain point in a remodeling project you have to throw up your hands in frustration and compromise with the perfect solution. I had reached that point with the medicine cabinet. I could have spent hours trying to find one on the Internet but the cost would have been more than I wanted to pay. No, it isn't exactly what I wanted. I am done with this part of the bathroom remodel and the new cabinet will do just fine.