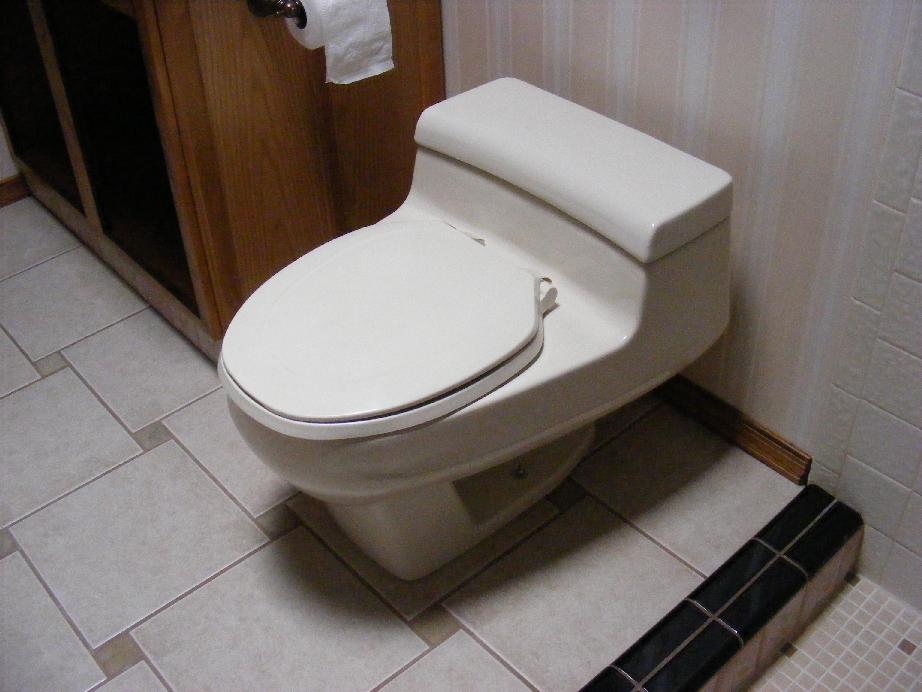 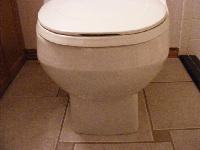 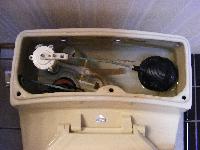 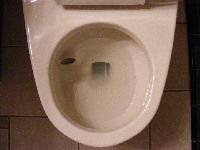 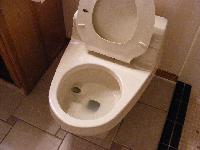 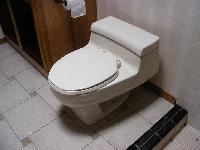 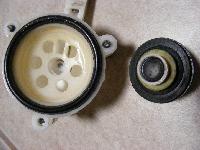 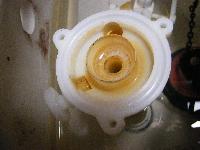 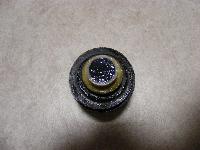 The toilet is in. I had been waiting for a tan toilet to show up at the Habistore. For a used toilet, it was in pretty good condition. I had to remove the old wax ring (ugh!). The seat was scratched up pretty badly but a little rubbing compound and wax made it acceptable. A little clean up and the toilet looked almost new.

I installed a FloodSafe water supply line that is supposed to protect against catastrophic leak failures. There are two plastic pieces with small holes that are fitted in each end of the supply line. These are designed to slow the water flow. I had a problem with one of the pieces coming loose. I put it back under the washer and was able to get the supply hose installed. When turning on the toilet water valve, the water would shut off. I have high water pressure at my house and opening the valve fully caused the automatic shutoff device to engage. I was able to get the water to flow properly by turning on the valve part way.

The innards of this low-line toilet looked unique and not unexpectedly needed a lot of work. The ballcock valve leaked and when I raised the water level water began leaking out of the toilet seat holes. Rather than find a replacement, I disassembled it. After drying, I put a little bit of Silicone on the washer inside the ballcock valve and leveled it using a razor blade. I let that dry and after reassembly adjusted the top screw. The water level is now just where it should be and the valve shuts off. It is slow to shut off and it 'whistles' a bit just before shutting off, but it works. It's not whistling Dixie but it is a bit noisy for 20-30 seconds. After a few weeks the whistling stopped which is kind of a shame. I might have made some money off of a new commode tune or two created by my toilet.

A better fix would be a thin layer of silicone and a flat rubber washer above or in place of the old one. The silicone solution seems to be holding up well and I don't mind the noise. I have never had so much joy from flushing a toilet before.

The ballcock design is old, simple and not very good. I thought that this version was unique to Eljer but during a recent trip to Lowes and a stroll down the plumbing aisle I was surprised to find this type of ballcock for about $9.00. There is really no need for a new valve when you can repair the old one in about an hour.

One of the nylon toilet seat bolts had broken during the seat installation and I had to get a replacement. The toilet was donated sans the nut and bolt cap, but Lowes had a tan cap set that perfectly matched the color of my toilet. They also had a Rialto toilet that looked identical to the Eljer for $329.00. Ouch. Thank you Habistore for a really great bargain.

I'm not a big fan of Eljer and the unusual styling and water path design inside the bowl are still under evaluation. It is a very different toilet and now that it is working I am really beginning to like it. It fits in well with the overall look I am trying to create and I think it looks great in the newly remodeled bathroom.