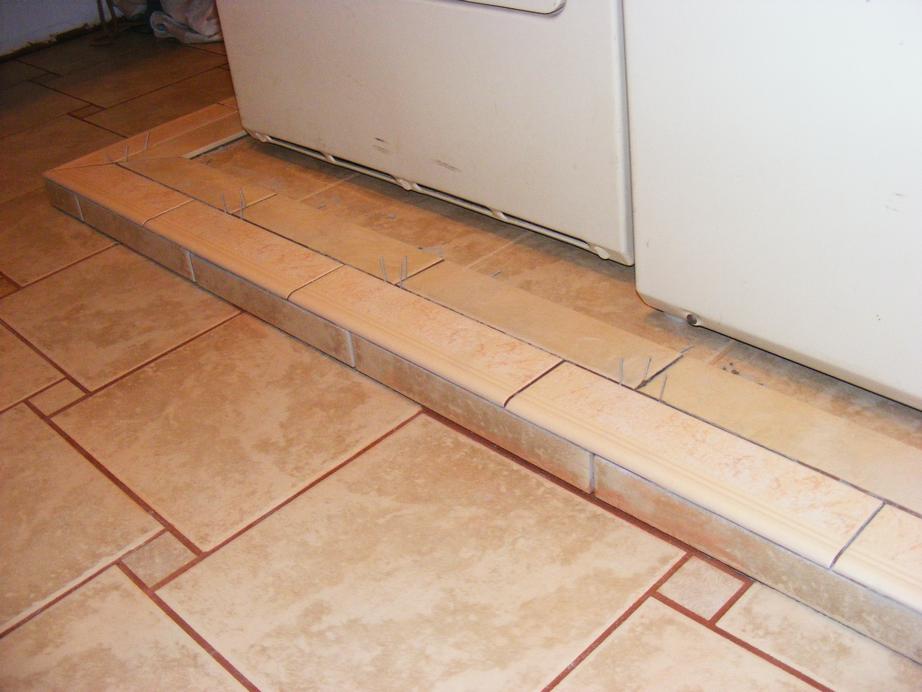 I had problems trying to determine how best to put ceramic tile on the catch basin perimeter. The perimeter was built with brick pavers that were slightly higher than the pavers used for the catch basin floor. I put thin-set on the front and top of the perimeter pavers so the prep work was already done. I just had to figure out what kind of ceramic tile to put on the perimeter so that it would look good and still be strong enough to handle some minimal abuse.

Originally I had planned to cut the 12x12 floor ceramic tiles and put these on the top of the perimeter. I would fudge the exposed front and back ends of the tile by grouting the corner. I decided that this was not professional enough.

I had already decided how to handle the front of the catch basin perimeter. I would cut the 12 inch beige ceramic tiles to fit 90° to the floor. The top of the perimeter was a different story. My first thought was to use the tan bullnose trim that I had purchased at the Habitat for Humanity Habistore. I could lay the bullnose tile back to back on the top edge of the perimeter. The problem with that idea is that I was four 3x13 inch bullnose tiles short and there was no chance of finding any more of them. 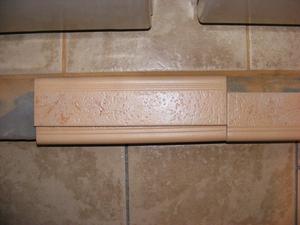 The second idea was to use the tan bullnose tile on the outer perimeter and use a quarter round ceramic tile trim on the interior. The picture below shows some pink quarter round trim that I had on hand just to get an idea of what it would look like when installed. 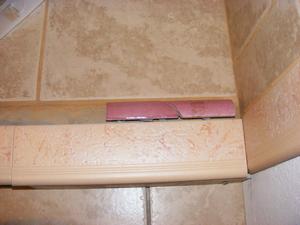 I had purchased some quarter round tile pieces but when I got them home they were darker than I liked. I was also educated by an employee at Home Depot that the quarter round tiles were made out of a softer grade of tile - unsuitable for floor tiles. The 22 quarter round tiles for the ten linear feet I needed were also very expensive at more than $1.50 for each six inch tile. I decided that it was best to continue the tan and beige colors from the wall on the perimeter and I returned the quarter round tiles to Home Depot. I then needed some beige bullnose tiles for the inside of the perimeter top. The next question was whether the bullnose tiles should be cut. I could put the inside beige tiles over the top of the catch basin floor tiles but I wasn't sure that you could put ceramic tile over ceramic tile and have them stay in place. Some research on the Internet suggested that you could do this. There wouldn't be any traffic on the tiles so I decided this was the best solution.

The pictures below run through the steps needed to install the catch basin perimeter.